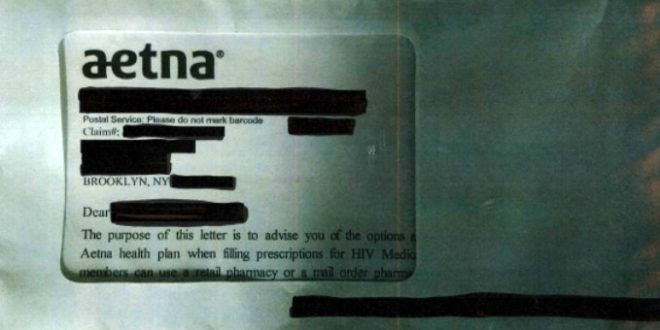 Legal groups on Monday filed a class-action lawsuit against the health insurer Aetna, alleging the company violated the privacy of its customers by sending many of them letters through which the phrase “filling prescriptions for HIV” was visible through envelope windows. The federal suit alleges the breach affected as many as 12,000 Aetna customers living in 23 states.

“For 40 years, HIV-related public health messages have been geared toward assuring people that it’s safe to come forward to get confidential HIV treatment, and now our clients come forward for HIV-related healthcare and Aetna fails to provide confidentiality,” said Ronda B. Goldfein, executive director of the AIDS Law Project of Pennsylvania, which filed the suit with the Legal Action Center and Berger & Montague P.C., in a written statement.

The lead plaintiff is listed by the pseudonym Andrew Beckett — a nod to the main character in the 1993 film “Philadelphia,” based in part on the story of an attorney who filed one of the first wrongful termination lawsuits at the height of the HIV/AIDS crisis in the 1980s.