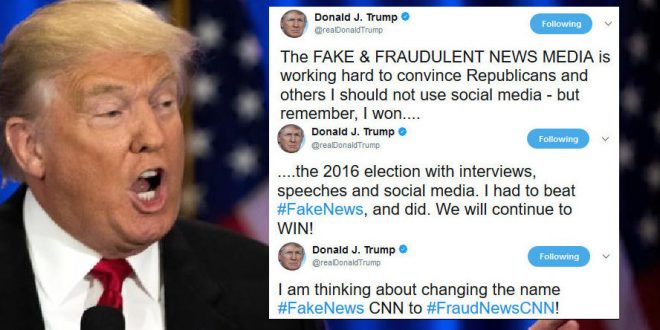 Trump Vows That His Twitter Assholery Will Never End

To President Trump, his social media habits have been vindicated by the fact that he won the 2016 election, and on Saturday accused a wave of “fake news” of attempting to turn his party against his tweets. He said as much on Saturday, following a wave of criticism over his controversial tweets about “Morning Joe” co-hosts Joe Scarborough and Mika Brzezinski.

Trump’s latest string of tweets has prompted another round of debate on his tweeting habits. Many journalists and politicians on both sides of the aisle say Trump has gone too far and should pare back the tweeting.

Trump’s tweeting controversial tweeting habits are nothing new, and the president’s often combative personality extends beyond the confines of Twitter, as was exhibited in interviews and speeches during the campaign. For example, when he alarmed many with his comment about then-Fox News host Megyn Kelly “blood coming out of her wherever” following a contentious debate exchange.

The FAKE & FRAUDULENT NEWS MEDIA is working hard to convince Republicans and others I should not use social media – but remember, I won….

….the 2016 election with interviews, speeches and social media. I had to beat #FakeNews, and did. We will continue to WIN!

I am thinking about changing the name #FakeNews CNN to #FraudNewsCNN!

My use of social media is not Presidential – it’s MODERN DAY PRESIDENTIAL. Make America Great Again!