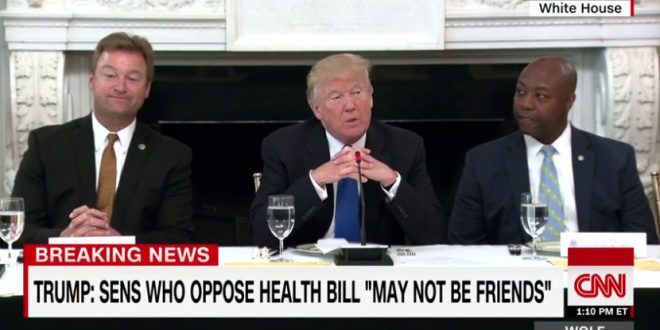 President Trump was not subtle during a lunch for Senate Republicans at the White House on Wednesday, pressuring Sen. Dean Heller (R-Nev.) to fall in line with the GOP’s health-care bill, The Hill reports. “[Heller] wants to remain a senator, doesn’t he?” Trump said, while seated directly beside Heller.

Heller is one of 2018’s most vulnerable Republicans, and emotions in his state are running high over his health-care vote. One group recently announced plans to run a seven-figure ad campaign against the senator due to his decision to defy Trump with his opposition to the bill, until Senate Majority Leader Mitch McConnell (R-Ky.) called them off.

“The other night I was surprised when I heard a couple of my friends—my friends, they really were and are. They might not be very much longer, but that’s okay. I think I have to get them back,” he said to laughter in the room, at one point turning to Heller to say, “[You were] the one we were worried about. You weren’t there. You’re going to be.”

And then Trump added: “He wants to remain a senator, doesn’t he?” The president continued, as Heller’s smile turned uncomfortable: “I think the people of your state—which I know very well—I think they’re going to appreciate it whenever you do.”

Look at Sen. Heller's face when Trump makes a veiled threat about getting him kicked out of office.
(Also, woman on mic at 0.12: "Ooo!") pic.twitter.com/3PimbJCfQt