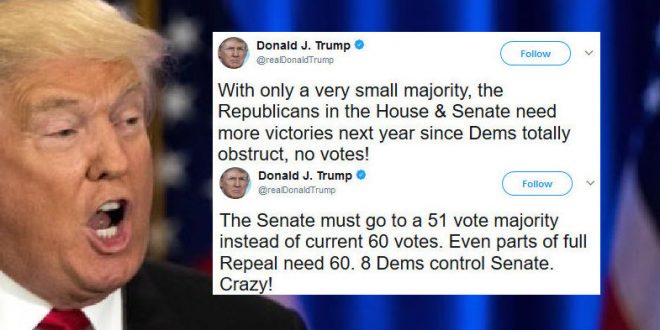 President Trump once again called for the end of the legislative filibuster in the Senate in order to repeal the Affordable Care Act after the Senate Republican healthcare bill plan was stymied Monday. “The Senate must go to a 51 vote majority instead of current 60 votes. Even parts of full Repeal need 60. 8 Dems control Senate. Crazy!” Trump tweeted.

It echoes previous calls Trump has made to end the 60-vote threshold to end debate on a bill, but it wouldn’t fix the problem the Better Care Reconciliation Act faced in the Senate. The bill, written by GOP leaders, couldn’t get 50 votes for a procedural motion to make it to the floor for debate and amendments.

In a follow-up tweet on Tuesday, Trump once again advocated the failure of the ACA, better known as Obamacare, to bring Democrats and the public around on a Republican plan. “As I have always said, let ObamaCare fail and then come together and do a great healthcare plan,” Trump tweeted. “Stay tuned!”

The new tweets, however, seemed to contradict Trump’s insistence on Monday night that Republicans immediately repeal Obamacare. “Republicans should just REPEAL failing ObamaCare now & work on a new Healthcare Plan that will start from a clean slate. Dems will join in!” Trump said.

Additionally, Trump suggested that Republicans should get rid of the legislative filibuster — generally known as the “nuclear option” — to make it easier to pass any Obamacare replacement bill.

With only a very small majority, the Republicans in the House & Senate need more victories next year since Dems totally obstruct, no votes!

The Senate must go to a 51 vote majority instead of current 60 votes. Even parts of full Repeal need 60. 8 Dems control Senate. Crazy!

Previous Former VP Al Gore: I Was Wrong About Trump, He’ll Never Come To His Senses On Climate Change [VIDEO]
Next McConnell Blames Dems For Obamacare Repeal Fail: I Hope They Consider What They’re Celebrating [VIDEO]