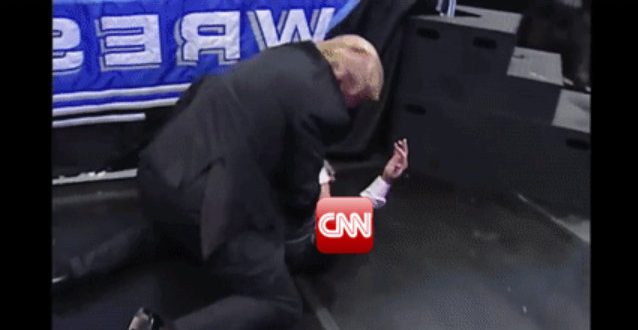 President Donald Trump on Sunday tweeted a video spinoff of him tackling and punching a man with the CNN logo superimposed on his face. CNN’s Brian Stelter points out that the video, which was likely tweeted by Trump’s social media director Dan Scavino, apparently came directly from a Reddit thread. Last week, deputy press secretary Sarah Huckabee Sanders disputed allegations that the president encourages violence. “The president in no way, form or fashion has ever promoted or encouraged violence,” Sanders said on Thursday.

.@ananavarro on Trump CNN tweet: “It is an incitement to violence. He is going to get somebody killed in the media.” pic.twitter.com/Ivip2ZscT4

"The President in no way form or fashion has ever promoted or encouraged violence. If anything, quite the contrary." – @SHSanders45 6/29/17