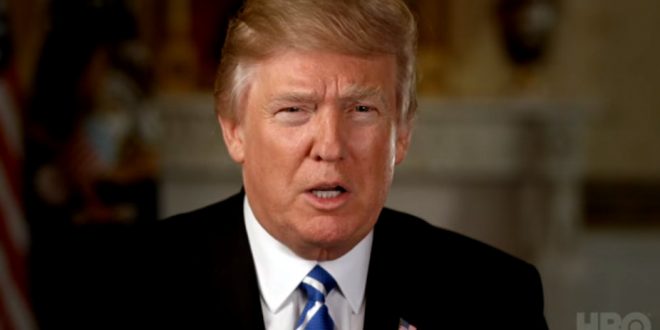 For a Fourth Of July documentary that aired last night on HBO, filmmaker Alexandra Pelosi (daughter of Nancy) invited Trump and former presidents to select a portion of the US Constitution to read for the camera. And so of course, Trump chose the section about the Electoral College.

Here’s the bit he recited:

The executive Power shall be vested in a President of the United States of America. He shall hold his Office during the Term of four Years, and, together with the Vice President, chosen for the same Term, be elected, as follows: Each State shall appoint, in such Manner as the Legislature thereof may direct, a Number of Electors, equal to the whole Number of Senators and Representatives to which the State may be entitled in the Congress: but no Senator or Representative, or Person holding an Office of Trust or Profit under the United States, shall be appointed an Elector.

See snippets of each president’s selection at the end of the trailer below.

Previous “Christian Militia” Founder Stewart Rhodes: If Hillary Clinton Had Won, America Would Now Be In A Civil War
Next MALTA: Marriage Equality Now Only Days Away