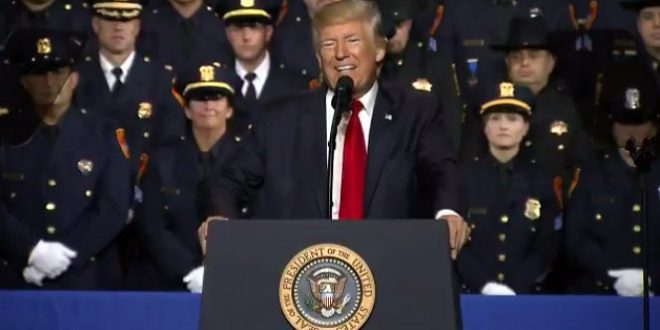 Trump Condones Police Brutality In Speech To Cops: “Don’t Be Too Nice” When Arresting Suspects [VIDEO]

“When you see these thugs being thrown into the back of a paddy wagon, you just see them thrown in. Rough. I said, ‘Please don’t be too nice.’ Like when you guys put somebody in the car and you’re protecting their head – like ‘don’t hit their head’ – and they’ve just killed somebody? I said, ‘You can take the hand away.'” – Donald Trump, speaking to a large audience of police officers in Long Island, New York. Trump’s message to rough up suspects was received with laughs and applause.

Here’s the president of the United States encouraging police officers to be rough with people they arrest pic.twitter.com/iLzoUEY89e

President Trump is openly and explicitly calling for, to wild applause just moments ago, cops to commit more police brutality.

Trump’s endorsing police brutality to room full of confused NYPD officers-must be really awkward & embarassing for them-I know it is for me.

Trump is LITERALLY encouraging police brutality right now during his speech to a group of law enforcement officers.

WTF, Trump?
Why are you advocating police brutality to a room full of cops?
And why are they cheering brutality?
Christ.#FridayFeeling

Trump: “When you see these thugs thrown into the back of a paddy wagon rough. I said please don’t be too nice.” Two words: Freddie Gray.

President Trump is telling police officers to bang criminal suspect’s heads on their cars while putting them into police cars.

In the unlikely event the Trump DOJ ever tries to prosecute a police officer for excessive force, you will see this quote at trial. https://t.co/PHKefIZhHM

Trump says that he’s okay with police being rougher on arrested suspects, such as hitting their head on police car. Crowd of police cheers.