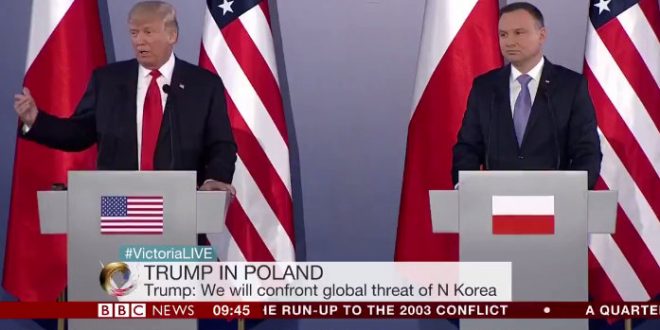 At a joint press conference this morning with the Polish president, Trump fielded a question from the Daily Mail, who asked about CNN’s handling of the Reddit user who created his wrestling video. Via Mediaite:

Putting North Korea on the back burner Trump pounced on CNN with obvious relish. “I think what CNN did was unfortunate for them. As you know, now they have some pretty serious problems. They have been fake news for a long time. They’ve been covering me in a very, very dishonest way.”

Trump was hardly content to just go after CNN. The President also has choice words for his former employer NBC. The network hosted his wildly popular reality show “The Apprentice” for more than a decade — a fact he did not let them forget.

“NBC is equally as bad, despite the fact that I made them a fortune with “The Apprentice,” but they forgot that. CNN has really taken it too seriously. I think they’ve hurt themselves badly, very, very badly. And what we want to see in the United States is honest, beautiful, free, but honest press. We want to see fair press. I think it’s a very important thing. We don’t want fake news.”

Trump attacks the media, CNN and NBC, in Poland: “They have been fake news for a long time.” pic.twitter.com/xCxaUDE9pT