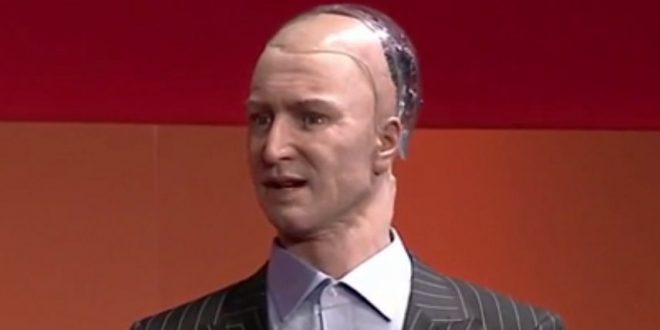 It was a spooky sight: two lifelike disembodied robot torsos discussing the pros and cons of humans in front of a nervously tittering audience in Hong Kong Wednesday.

Artificial intelligence is the dominant theme at this year’s sprawling RISE tech conference at the city’s harbourfront convention centre, but the live robot exchange took the AI debate to another level.

While chief scientist Ben Goertzel of Hong Kong-based Hanson Robotics, which invented the machines, sang their praises, the robots seemed more sceptical of their human peers.

When Goertzel asked the duo whether robots could really be moral and ethical, Han countered: “Humans are not necessarily the most ethical creatures”. The robot later pointed out: “In 10 or 20 years, robots will be able to do every human job.”

Previous Megachurch Pastor: Healthcare Is God’s Issue So There Should Be A National Tax For Churches To Provide It
Next Scamvangelicals “Lay Hands” On Trump In Oval Office