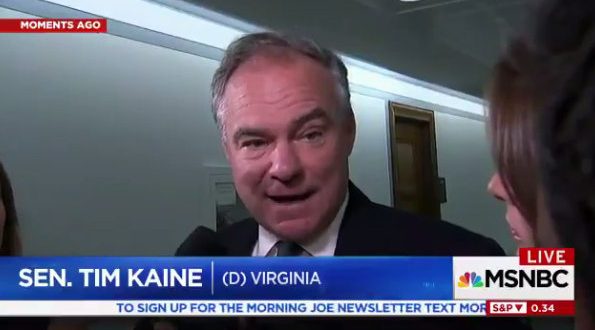 Hillary Clinton’s former running mate, Sen. Tim Kaine, said Donald Trump Jr. may have committed treason when he agreed to meet with a Russian lawyer under the pretense of getting dirt on Clinton.

“We are now beyond obstruction of justice,” the Virginia Democrat told CNN Tuesday. “This is moving into perjury, false statements and even potentially treason.”

Sen. John Cornyn, a high-ranking Texas Republican on the committee, said of Trump Jr.’s comments, “I don’t think we have enough information to reach a conclusion but he certainly made himself a witness.”

Previous Trump On Junior’s Posting Of Emails: My Son Is A High-Quality Person And I Applaud His Transparency
Next Julian Assange: I Told Trump Junior To Release Those Russian Collusion Emails Anonymously Via Wikileaks