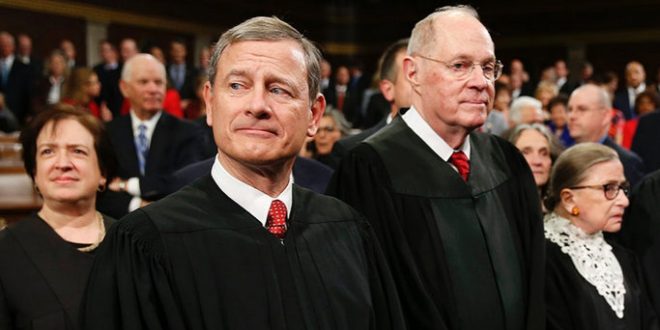 How The Supreme Court Could Overturn Obergefell

What happens if Kennedy is replaced by a Gorsuch-style conservative? At that point, Roberts would be free to rewrite Windsor and Obergefell however he wants. Roberts could remain faithful to the original text of both decisions. He could also reverse them. But the likeliest possibility is that Roberts first cuts them down to a single guarantee—the right for same-sex couples to receive a marriage license with no attendant privileges.

In case after case, Roberts could vote to allow discrimination against same-sex couples but affirm their right to the license itself. He could, for instance, permit the denial of spousal benefits to same-sex couples, contending that so long as gay people can marry, their rights have not been abridged.

One by one, he could pluck the stars out of Obergefell’s “constellation of benefits,” while insisting that he respected the decision’s bottom line. And then, once Obergefell has been mostly gutted, Roberts could drop this pretense and deliver the final death blow, asserting that the decision had already been lethally eroded. It’s a classic Roberts trick.

We’ve already seen the Texas Supreme Court rule that marriage doesn’t include state benefits for gay couples. Hit the link for the full piece, it’s worth your time.

Previous Kremlin Spox: If Trump Asks Putin About Chechen Persecution Of Gay Men, There Will Be An Answer
Next Poland’s First Lady Snubs Trump’s Handshake [VIDEO]