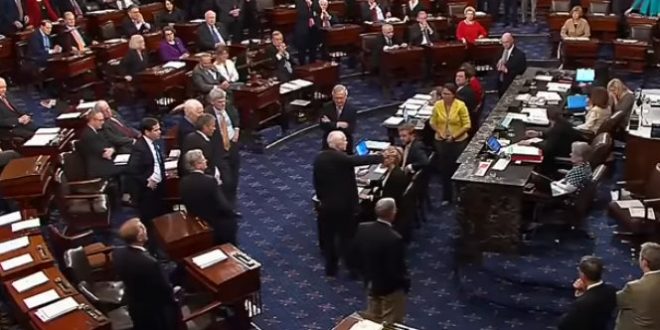 Senator John McCain of Arizona, who just this week returned to the Senate after receiving a diagnosis of brain cancer, cast the decisive vote to defeat the proposal, joining two other Republicans, Susan Collins of Maine and Lisa Murkowski of Alaska, in opposing it.

The 49-to-51 vote was also a humiliating setback for the Senate majority leader, Mitch McConnell of Kentucky, who has nurtured his reputation as a master tactician and spent the last three months trying to devise a repeal bill that could win support from members of his caucus.

As the clock ticked toward the final vote, which took place around 1:30 a.m., suspense built on the Senate floor. Mr. McCain was engaged in a lengthy, animated conversation with Vice President Mike Pence, who had come to the Capitol expecting to cast the tiebreaking vote for the bill. A few minutes later, when Mr. McCain ambled over to the Democratic side of the chamber, he was embraced by Senator Dianne Feinstein, Democrat of California. A little later Senator Amy Klobuchar, Democrat of Minnesota, put her arm around Mr. McCain.

We are not celebrating; we are relieved–for the Americans who can now keep their #healthcare. We must work together to improve the law.

That in the clutch @SenJohnMcCain at long last stood up to the bullies is a Joseph Welch vs Joe McCarthy moment in US history.

The nightmare is over, at least for now.

3 Republicans and 48 Democrats let the American people down. As I said from the beginning, let ObamaCare implode, then deal. Watch!