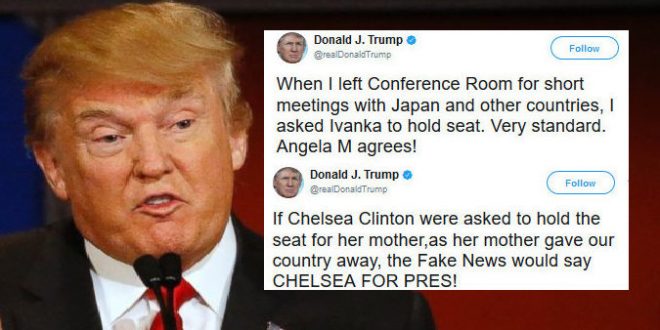 SHADE: Chelsea Clinton Fires Back After Trump Claims Hillary Would Have Had Her Sit In At G20 Summit

After Ivanka Trump faced heat for briefly stepping in for her father at the G-20 summit on Saturday, President Trump has redirected criticism of her at former first daughter Chelsea Clinton.

“When I left Conference Room for short meetings with Japan and other countries, I asked Ivanka to hold seat,” Trump tweeted. “Very standard. Angela M agrees!”

Trump continued, though, pivoting to an alternate fictional narrative where former Democratic presidential candidate Hillary Clinton would have done the same.

Chelsea Clinton was quick respond via Twitter, saying her parents would have “never” thought to ask her to sit in at such event.

When I left Conference Room for short meetings with Japan and other countries, I asked Ivanka to hold seat. Very standard. Angela M agrees!

If Chelsea Clinton were asked to hold the seat for her mother,as her mother gave our country away, the Fake News would say CHELSEA FOR PRES!

Good morning Mr. President. It would never have occurred to my mother or my father to ask me. Were you giving our country away? Hoping not. https://t.co/4ODjWZUp0c