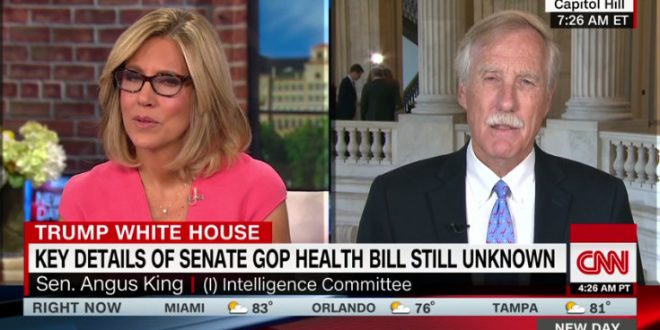 CNN host Alisyn Camerota could do nothing but laugh at Sen. Angus King (I-ME) when he revealed what information he had about the Republican health care bill that the Senate will vote on today. The Maine senator was completely silent. “Let me give you a quick synopsis of what I know about the bill that we’re going to be voting on this afternoon,” he said, before going completely silent. Camerota waited patiently before getting the joke, and then began laughing. “I’m taking notes,” she told King.

“I’m serious, there is no one who knows,” King explained. “I talked to two senior Republicans last Thursday afternoon. I said ‘what are we going to be voting on, on Tuesday.’ They said ‘We have no idea.’ I think it’s going to be the House bill, but then there may be a substitute amendment, and I’ve never seen a process like this. No discussion. This is really, to quote a famous American, complicated stuff, and to be talking about one-sixth of the U.S. economy and tens of millions of people without any understanding of what the implications are, I just — I really don’t understand it.”

Senator Angus King falls silent after saying he’ll give a quick synopsis of what’s being voted on today https://t.co/gg5wEE4y6Q

Previous Sean Hannity Urges Viewers To Troll Journalists [VIDEO]
Next Rand Paul: I Won’t Vote For A Healthcare Bill That Hasn’t Been Written Or Scored By The CBO [VIDEO]