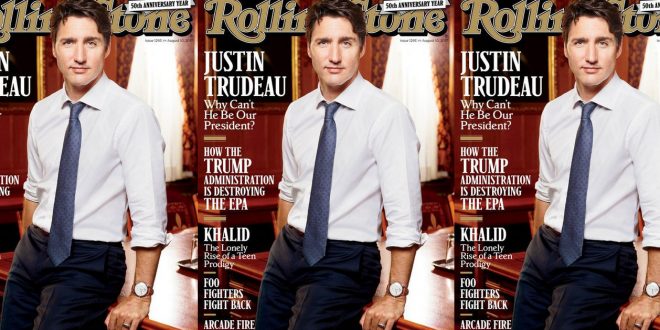 Rolling Stone: Why Can’t Trudeau Be OUR President?

It’s strange to witness: He speaks in a modulated, indoor voice. His dark hair is a color found in nature. At home, there is a glamorous wife and three photogenic children, still not old enough to warm his seat at next week’s G-20 summit or be involved in an espionage scandal.

When Trudeau moves on to his feminist bona fides (women and minorities make up more than half of his Cabinet), he pauses for a moment, but does not lose his train of thought. His words are coherent and will not need to be run through Google Translate when he is done (except if you want to translate his French into English).

He talks about steps taken to deal with the opioid crisis and mentions the country’s dropping unemployment rate. He uses the original Clintonian recipe on the crowd: “We’re focused on getting people into good careers and helping families get ahead and stay ahead,” he says. “But we know there’s more hard work in front of us than there is behind us.”

Then he gives the press corps a high-five. “The back and forth between the press and government is essential to any good democracy,” he says. “When you’re at your best, it reminds us and challenges us to be at ours. So thank you all for your tireless work.”

Where are we? Narnia? Coachella recovery tent? 2009? We are in Ottawa, Ontario, a mere 560 miles from Washington, D.C.

Hit the link and read the rest. You can at least be happy for Canada, right? Right?