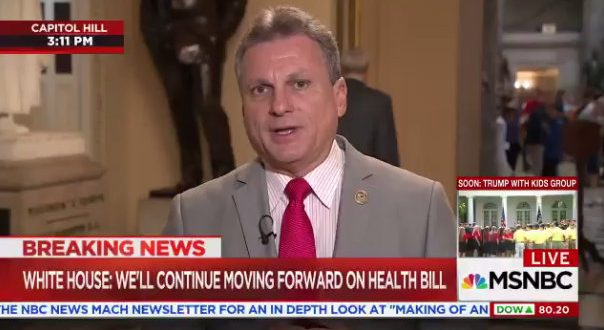 Republican House Rep: Somebody Needs To Go Into The Senate And “Snatch A Knot In Their Ass” [VIDEO]

Rep. Buddy Carter (R-GA), frustrated at the Senate’s pace in their effort to repeal Obamacare, said Wednesday that “somebody needs to go over there into that Senate and snatch a knot in their ass.”

The remark came during an interview with MSNBC’s Ali Velshi, after the cable news host asked about a female senator’s “no” vote on the GOP’s repeal effort. The phrase generally refers to spanking or other physical discipline.

“What do you think about the President going after Lisa Murkowski [R-AK] for her no vote yesterday on the motion to proceed?” Velshi asked the congressman. “I think it’s perfectly fair,” Carter said, responding to Velshi. “Let me tell you, somebody needs to go over there into that Senate and snatch a knot in their ass.”

What does that even mean?

Here it is: GOP Rep. Carter, asked about Murkowski: “Somebody needs to go over there to that Senate and snatch a knot in their ass.” @MSNBC pic.twitter.com/1CVcENn9Kq

Previous Christian Activist Matt Barber Calls On Trump To Now Ban “All Open Sexual Deviancy” In The Military
Next Dancing With The Stars Producers: We Want Spicey