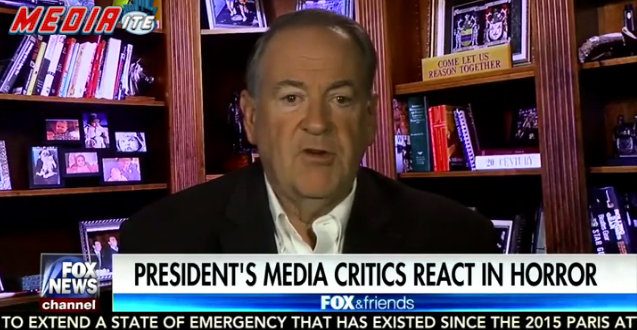 Mike Huckabee: Trump Is Incredibly Capable And Has The Stamina Of Three Guys Half His Age [VIDEO]

When July 3rd falls on a Monday between the weekend and the July 4th holiday, cable news brings out its back-ups. So Fox & Friends featured the weekend hosts and trotted out old reliable Governor Mike Huckabee to opine on yesterday’s controversial tweet showing President Trump “body slamming’ CNN. Shocker: Huckabee took the president’s side and railed on the media reaction.

When jokingly asked by co-host Pete Hegseth about how the President has time to speak with Germany and France (as Trump had tweeted earlier) instead of spending all of his time on Twitter as the “so-called mainstream media” suggest, Huckabee replied in what appeared to be in all seriousness. “Trump is an incredibly capable person who has the stamina of three guys half his age.” The only thing missing from this aside was the “Dear Leader” we typically hear in North Korea.

Huckabee went on to say, “The media hates Donald Trump more than they love America.”