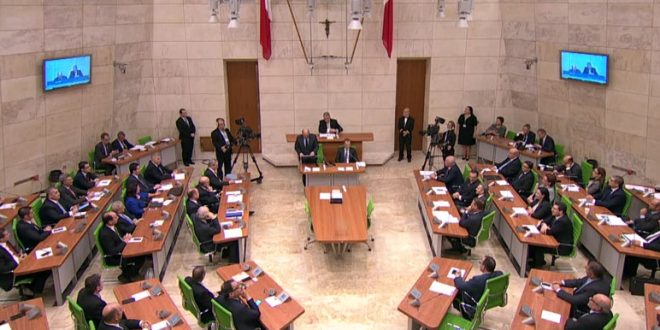 Parliament this evening approved the second reading of the bill introducing gay marriage, with one Nationalist MP, Edwin Vassallo, voting against. The committee stage, as announced this evening by Prime Minister Joseph Muscat, will take place on Thursday and Friday with a final vote on the third reading to be taken on Wednesday 12 July.

The Bill, as proposed by government seeks to replace gender specific terminology with gender neutral terms such as ‘spouse’, ‘partner’ and ‘person who gave birth’ instead of ‘mother’, ‘father’, ‘husband’ and ‘wife’. Concluding the debate, Prime Minister Joseph Muscat said that the discussion in hand was not about marriage, but one about humanity so that everyone is treated equally.

Nationalist MP Hermann Schiavonne ripped into the Bill, describing it as a “Marxist and communist” law intended to introduce uniformity instead of equality. In his speech, Schiavonne said that he will continue to view marriage as solely between a man and a woman, even after the Bill passes into the law.

“No law can change the way I view marriage, but I respect people who want other forms of marriage,” he said. He lambasted the Bill’s proposal to abolish the terms ‘mother’, ‘father’, ‘husband’ and ‘wife’ from certain articles of Maltese law, in favour of the gender-neutral terms ‘parent’ and ‘spouse’.

“These proposed amendments aren’t promoting diversity or equality but uniformity,” he said. “This is a communist and Marxist law, because it is those ideologies that preach that everyone should be the same.”

Despite not yet having full marriage equality, Malta has regularly ranked at the top of European nations on LGBT issues. Back in December, Malta’s Parliament voted unanimously to ban ex-gay torture, the first country in the world to do so.

Around 90% of Malta’s half-million residents are Catholic and Catholicism is nominally the official state religion, per their constitution. (Tipped by JMG reader Luis)