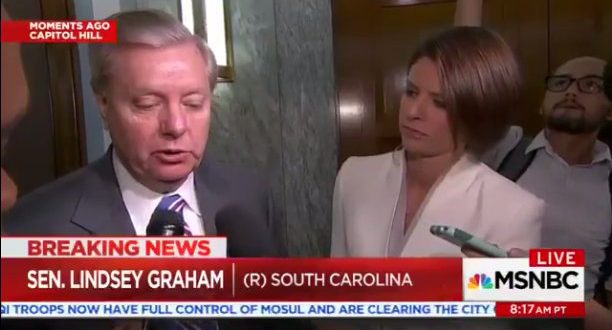 Lindsey Graham On Trump Junior: When A Foreign Government Offers To Help, The Answer Is No [VIDEO]

“Anytime you’re in a campaign and you get an offer from a foreign government to help your campaign, the answer is no,” Graham told reporters.

“So I don’t know what Mr. Trump Jr.’s version of the facts are. Definitely– he has to testify. That email is disturbing.”

.@DonaldJTrumpJr will be on @seanhannity tonight.

Lindsey Graham: "If there's an email from a Russian suggesting that the Russian government wants to help, that would be very problematic." pic.twitter.com/Bof6eNysMZ

Previous Pastor Bad Wig Prays For God To “Take His Sword Out From Heaven” And Smite Trump’s Enemies [VIDEO]
Next Mike Huckabee: The Press Has Become The Predator