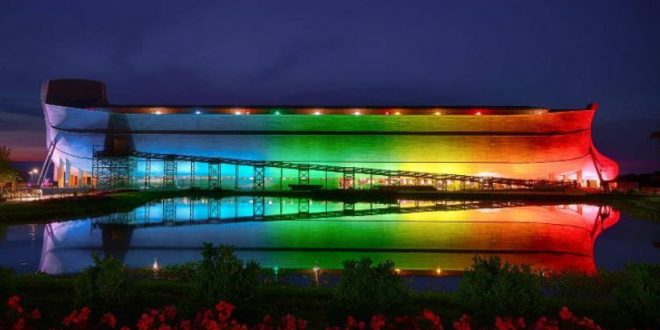 Yesterday I reported that Ken Ham’s creationist for-profit company had sold the Ark Encounter to its non-profit division for $10 in order to evade a 50-cents per ticket local sales tax meant to pay for the additional fire and police protection required by the attraction. Well, THAT fucking backfired on them big time.

It has come to our attention that your client, Ark Encounter, LLC, is in breach of its Tourism Development Agreement… with the Commonwealth. On July 10, 2017, the Tourism, Arts, and Heritage Cabinet… became aware of a quit claim deed transferring the Ark Project land, with all the privileges and appurtenances to the same, from Ark Encounter, LLC, a for profit company, to Crosswater Canyon, Inc. a non-profit company.

We believe that your client is aware that they may not be eligible for state tax incentives if the Ark Project is owned by a non-profit legal entity. Answers in Genesis, the parent company of Crosswater Canyon, Inc., and Ark Encounter, LLC clearly states on its website: “The for-profit LLC structure also allows the Ark Encounter to be eligible for various economic development incentives that would not have been available with a non-profit structure.”

Furthermore, as a the Tourism Development Agreement is between the Commonwealth and Ark Encounter, LLC, not Crosswater Canyon, LLC, the current owner, please be advised that no further incentives may accrue from sales tax imposed on sales generated by or arising at the tourism development project, as of the date of transfer of the property, June 28, 2017.

Hemant notes that the above bolding is the state’s and then he turns the dagger:

And I love how they quoted an excerpt from Ark Encounter’s website — from an FAQ that Ken Ham has since deleted — as evidence that the Creationists have always been fully aware that this could happen. The Creationists running Ark Encounter just screwed themselves out of $18 million over the next decade because they didn’t want to pay a local safety fee worth about $700,000 a year. We already knew Creationists were ignorant about science. Turns out they don’t know how to do math, either.