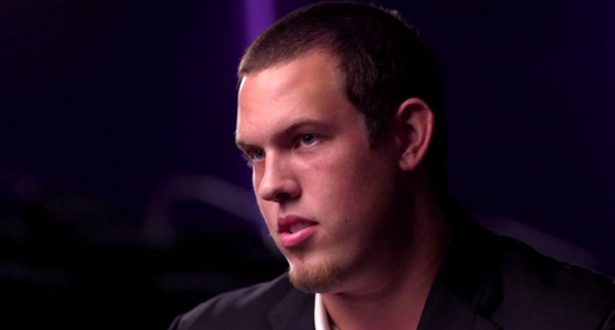 “I came out to my teammates, and I’ve never felt so loved and so accepted ever in my life than when I did that,” Frantz told ESPN’s Holly Rowe on Wednesday. “And ever since then it’s been great. I’ve grown so much closer to my teammates since. So it’s been an amazing experience.”

Kansas State head coach Bill Snyder also discussed how the entire team embraced Frantz: “I was quite comfortable that they would be very receptive and that they would treat him as they always said as, you know, his teammate and someone that they cared about. And they did.”

The Lawrence, Kansas, native started 13 games for the Wildcats last season, and he is expected to start at left tackle during his sophomore campaign. Per ESPN, Frantz and Arizona freshman defensive end My-King Johnson are the only two openly gay players in major college football.

Frantz appears to retweet a lot of right wingers, so it seems likely he’s a homocon.
.