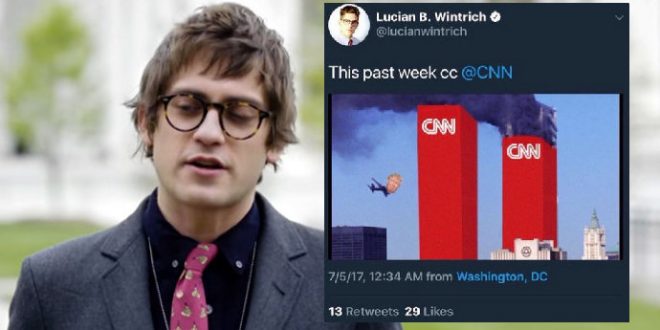 The American right frequently delights in its mockery of CNN, dutifully following in the footsteps of President Trump, who spent much of the last week maligning the cable news network. Sometimes, however, that glee can seem misplaced.

Lucian B. Wintrich, the White House correspondent for right-wing news site Gateway Pundit, decided to express his disdain for the network’s alleged desire to stifle the Trump administration by depicting President Trump as one of the hijacked 9/11 airliners crashing into the World Trade Center.

The tweet — since deleted — was clearly intended as a slight at CNN and recent controversies surrounding its reporting. Perhaps unintentionally, Wintrich approvingly conflated Trump with Al Qaeda while casting CNN in the role of the 3,000 innocents who were killed that morning.

The image shows Trump’s head crudely superimposed onto the fuselage of United Airlines Flight 175, which terrorists slammed into the south tower of the World Trade Center. Sixty people died aboard the airplane. Six hundred fourteen died in the explosion of the tower, the resulting fire and the building’s ensuing collapse.

Wintrich was also in the national news earlier this year when he falsely claimed that a Fox reporter had assaulted him outside the White House briefing room.