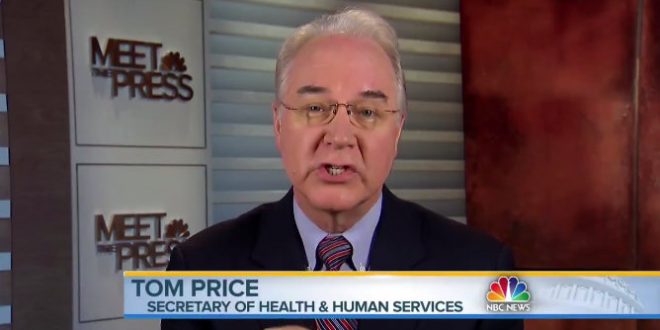 Host Chuck Todd pressed Price on the issue, asking him what he thinks “as a father” of Trump’s tweets last week. Price responded by saying there are “incredible challenges” facing the country.

“And your program, a program with the incredible history of ‘Meet the Press,’ and that’s what you want to talk about?” Price asked.

“With all due respect, you’re blaming me for what the president of the United States has spent his entire week focused on?” Todd asked. Todd then asked Price why Trump is not as devoted as the HHS secretary is to the issues of healthcare.

“Why isn’t the president as devoted to this as you are?” Todd asked. “Well I think that he is, absolutely. The fact of the matter is that he can do more than one thing at a time,” Price said.

WATCH: “The fact of the matter is he can do more than one thing at a time,” @HHSGov says on Trump tweeting and passing health care. #MTP pic.twitter.com/nie4SfYXZb