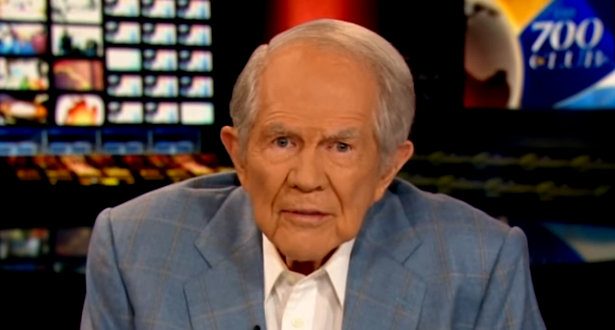 GLAAD Blasts Trump For Interview With Pat Robertson: This Should Finally Prove Trump Is Not An LGBT Ally

Robertson is infamous for calling for  so-called “religious exemptions” to push a dangerous anti-LGBTQ agenda, accusing LGBTQ people of deliberately spreading HIV and AIDS, supporting so-called “conversion therapy,” and comparing the LGBTQ community to Satanists as well as thieves, rapists, and murders.

“Today’s interview with anti-LGBTQ activist Pat Robertson should be the last straw for anyone leaving hope that President Trump would be an ally to LGBTQ people,” said Sarah Kate Ellis, President and CEO of GLAAD.

“Trump refused to speak out about LGBTQ Pride Month or against the atrocities facing gay men in Chechnya in favor of today using the office of the President to give credibility to a debunked TV personality with a long history of peddling vile inaccuracies and salacious insults that harm LGBTQ people. As anti-LGBTQ activists like Robertson get the red-carpet treatment at the White House, LGBTQ people must stay visible and fight back against all those seeking to erase our hard-fought progress.”

Previous DO NO HARM: House Dems Again Seek To “Correct” RFRA Law With Amendment Banning Discrimination
Next Trump Blames Obama Administration: My Son Could Only Meet With That Russian Because She Was Let In