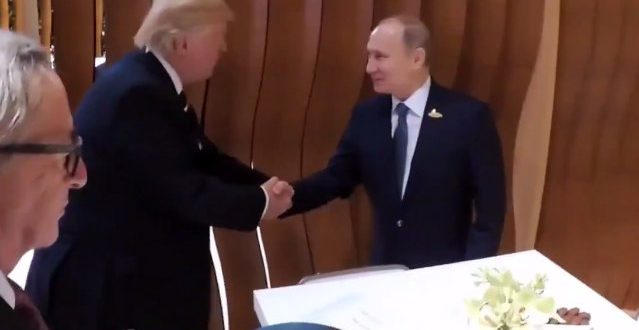 US President Donald Trump and Russian President Vladimir Putin have met for the first time after months of intense speculation about their relationship – and Mr Trump appeared to give the Russian leader slap on the back. The highly anticipated handshake happened earlier and was caught on camera by journalists at the G20 Summit in Hamburg.

A towering Mr Trump was seen gripping Mr Putin’s right arm firmly with both hands, before slapping him on the back in an apparent gesture of friendliness before the two were seen smiling side-by-side next to each other. European Commission president Jean-Claude Juncker was also there, watching the moment unfold.

Mr Putin and Mr Trump will meet again later this afternoon for an hour-long meeting on the sidelines of the summit to discuss a number of controversial issues. It will be a sit-down overshadowed by the investigations into whether Mr Trump’s campaign coordinated with Moscow during last year’s presidential election.

Previous McConnell Admits Obamacare Repeal Is Failing
Next Trump: Everyone At The G20 Is Talking About Podesta