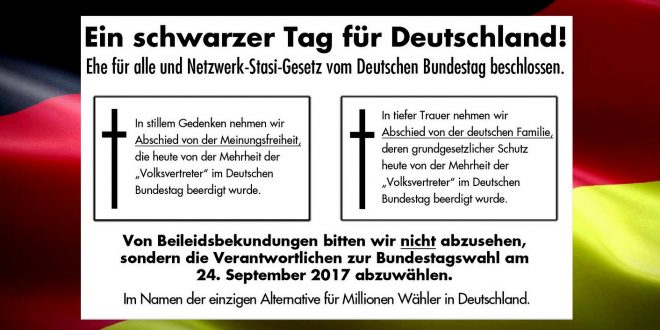 “We are currently studying a challenge at the constitutional court,” Gauland said in an interview with Bild Zeitung, days after parliament legalized same-sex marriage.

AfD’s internet site features on its front page a death notice, saying “In deep sorrow, we say good-bye to the German family, whose constitutional protection was buried by the ‘representatives of the people’ at the German parliament.”

Instead of condolence notices, the AfD advises Germans to throw out the parliamentarians who voted for equal marriage rights in the upcoming elections.

The AfD currently holds zero seats in Parliament. Its nominal candidate to replace Merkel is Alice Weidel, a homocon Trump fan who is in a registered partnership. She and her partner have two children.