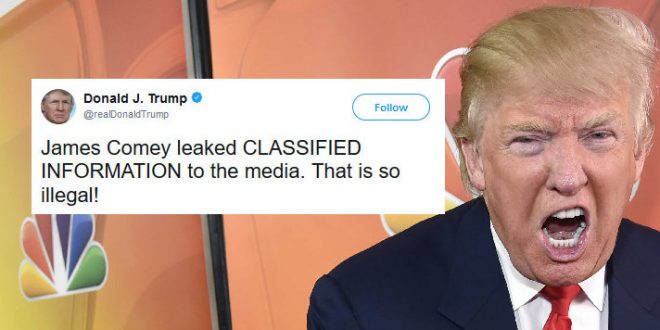 Fox and Friends co-host Steve Doocy admitted Tuesday that the report they did on former FBI Director James Comey revealing classified information in his memos was “mistaken.”

After the story aired on the Monday morning show, President Donald Trump then tweeted, “James Comey leaked CLASSIFIED INFORMATION to the media. That is so illegal!” However, as of Tuesday at 8:00 a.m., Trump’s tweet still existed on his page and he has not corrected the tweet.

“Yesterday on this program we aired and tweeted this story saying former FBI director James Comey leaked memos containing top secret information,” he said. “We were mistaken in that.

According to the report, half of the memos contain information classified at the secret or confidential, not top-secret. Markings of the documents in which Mr. Comey leaked are, at this point, unclear. Just wanted to straighten that out.”

Fox News had to issue a retraction about Comey leaking top secret info (he did not). Did I miss your fake news tirade about them?

Previous Sebastian Gorka Rages At CNN Host: Your Ratings Are Lower Than Cartoons On Nick At Night [VIDEO]
Next Email To Trump Junior Promised “Incriminating” Dirt On Hillary To Be Provided By The Russian Government