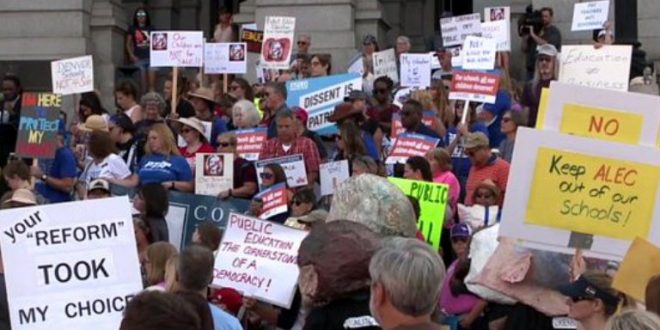 Hundreds of people gathered at the Colorado statehouse Wednesday morning in protest of Education Secretary Betsy DeVos and her Denver speech Thursday at the annual meeting of the American Legislative Exchange Council.

“This needs to make a statement,” said Suzanne Ethredge, president of the Pueblo Education Association, a teachers union. Ethredge drove up from Pueblo with a group of about a dozen educators to join in the protest.

“My biggest fear is (DeVos) is going to destroy the public education system completely,” she said. University of Denver doctoral student Alicia Mountain said she joined in the rally to ensure DeVos doesn’t dismantle Title IX for sexual assault victims.

Critics say both DeVos and the American Legislative Exchange Council — known as ALEC — support the privatization of public schools. Thousands of GOP lawmakers, thinkers and lobbyists will be in the Mile High City this week for the conservative gathering.

Hundreds out for ALEC, Betsy DeVos protest at the Capitol pic.twitter.com/3xhXD7GbNg