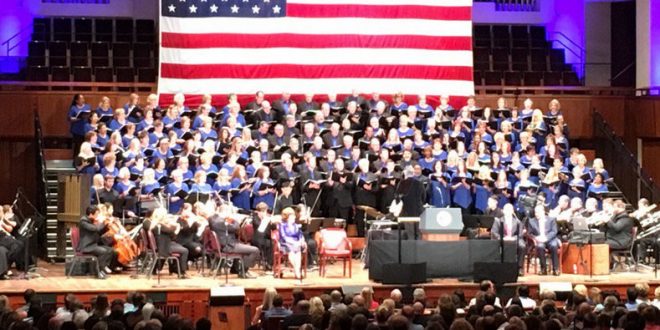 Remember the screaming headlines on Breitbart that time a group of kids sang a song about Obama? The Hill reports:

The choir, from the First Baptist Church in Dallas, performed at the “Celebrate Freedom Rally” Saturday at the Kennedy Center. Lyrics in the song include “Lift the torch of freedom all across the land / Step into the future joining hand in hand.”

First Baptist Dallas is led by Robert Jeffress, a Trump supporter who also spoke at the rally on Saturday. Jeffress’s political views and staunch defense of Trump have sometimes been criticized by other evangelicals. Trump’s friendship with Jeffress, meanwhile, earns him condemnation from LGBT groups due to Jeffress’s positions against on gay rights.

The First Baptist Church in Dallas serenaded our Commander-In-Chief with a song based on his motto “Make America Great Again” pic.twitter.com/i3kJbK0LH2