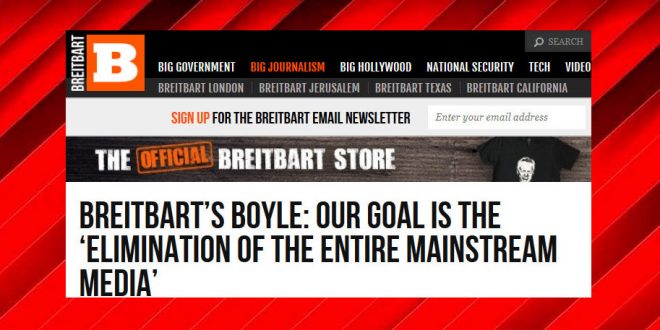 Breitbart’s Manifesto: Our Goal Is The “Full Destruction And Elimination Of The Entire Mainstream Media”

Matthew Boyle, Breitbart News’ Washington Political Editor, gave a speech entitled “Combating Fake News: Replacing Establishment Media” at the Heritage Foundation in Washington on Wednesday. “The goal eventually is the full destruction and elimination of the entire mainstream media. We envision a day when CNN is no longer in business. We envision a day when the New York Times closes its doors. I think that day is possible,” he said in his speech to the Phyllis Schlafly Collegians Leadership Summit.

“The media is an industry in crisis that refuses to admit that it’s an industry in crisis. It’s almost like an alcoholic refusing to admit that they have a problem. They continue to go out there and make the same mistakes over and over again. It’s actually pretty easy, I could sit here all day and make a full time living on fact checking CNN. It gets boring after a while, but they make mistakes over and over again. Many of them, the same mistakes, and they refuse to correct them.”

“Journalistic integrity is dead. There is no such thing anymore. So, everything is about weaponization of information. Both sides are fighting on the battlefield of ideas and you know CNN, the New York Times, the Washington Post, Politico, Associated Press, MSNBC, NBC, CBS, the whole alphabet soup they’ve all thrown in together with the institutional left.”

And the man Breitbart put in office has already worked to put their plan into action.