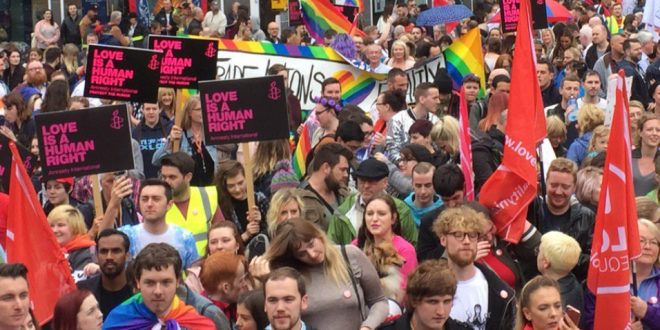 Thousands of people have joined a major parade through Belfast city centre demanding same-sex marriage rights. The demonstration on Saturday afternoon concluded with a rally in front of City Hall.

The ban on equal marriage in Northern Ireland is one of several sticking points delaying the formation of a new powersharing government at Stormont. It is the only part of the UK and Ireland where the practice remains outlawed.

The DUP’s opposition to changing the law has attracted increased scrutiny across the UK since the party became the UK Government’s kingmaker at Westminster. The DUP has used a controversial Stormont voting mechanism, the petition of concern, to prevent a law change, despite a majority of assembly members supporting the move at the last vote.

Some photos from the march for equal marriage in Belfast. Amazing turnout! This is the side of Belfast that I'm proud of! 🌈#EqualMarriage pic.twitter.com/sADrlYfY7Q

'As we go marching, marching
We bring the greater days…'

From Belfast with Love – proud to march for marriage equality today. 🏳️‍🌈👊🏻 pic.twitter.com/RVD4PJ2uFA

.@GerryAdamsSF and @moneillsf supporting the demand for marriage equality at a huge march and rally in Belfast today #EqualityMarch pic.twitter.com/q2MJhs6rcM

Proud to walk w/ my @allianceparty colleagues in the march for marriage equality in Belfast today! #loveislove pic.twitter.com/Vz935xWzIu

@sinnfeinireland on the march at the Marriage Equality parade in Belfast city centre today! pic.twitter.com/OxnEX2CtBD