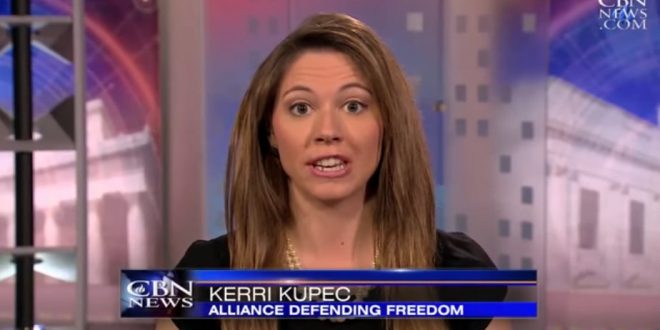 Alliance Defending Freedom: We’re Not Haters And It’s Fake News That We Back Criminalizing Homosexuality

Alliance Defending Freedom invited Attorney General Jeff Sessions to a conference on religious freedom last week. In an apparent attempt to link President Trump’s attorney general to some scandal, ABC News – reporting on the AG’s participation in the conference – trotted out an accusation that ADF was an “anti-gay hate group.”

ADF’s director of communications, Kerri Kupec, says the phraseology was an old trope made up by the left-leaning Southern Poverty Law Center. “SPLC attacks anyone who does not agree with their extreme leftist ideology, and that kind of hate-mongering just needs to stop,” she tells OneNewsNow.

In its report, ABC says ADF (according to SPLC) “specializes in supporting the criminalization of homosexuality abroad.” To which, Kupac responds: “I have no idea where that came from. That’s fake news, for sure.” When asked what ADF would do if someone who actually did hate homosexuals asked for their help, she states emphatically: “We would not represent someone who held that position.”

“When given the same choice the Supreme Court of the United States had in Lawrence vs. Texas, the Indian Court did the right thing. India chose to protect society at large rather than give in to a vocal minority of homosexual advocates. America needs to take note that a country of 1.2 billion people has rejected the road towards same-sex marriage, and understood that these kinds of bad decisions in the long run will harm society.”

In 2003, ADF president Alan Sears co-wrote a book titled The Homosexual Agenda: Exposing The Principal Threat to Religious Freedom Today, which warned that eliminating anti-sodomy laws would lead to the overturning of “laws against pedophilia, sex between close relatives, polygamy, bestiality and all other distortions and violations of God’s plan.”

And from the ADF’s 30-page Lawrence amicus brief:

Alliance Defending Freedom was jointly founded in 1994 by the leaders of Coral Ridge Ministries, Focus On The Family, and the American Family Association.

They are representing the “Jesus wouldn’t serve gays” Colorado baker in the case to be heard before the Supreme Court later this year. Last week anti-gay Washington florist Barronelle Stutzman, also represented by the ADF, petitioned to join the case.

Previous Trump: The Health Bill Will “Get Better At Lunchtime” And “Dems Scream Death As Obamacare Dies”
Next House Dems Introduce Resolution Of “No Confidence” In Trump: This Is Not How A Free World Leader Behaves