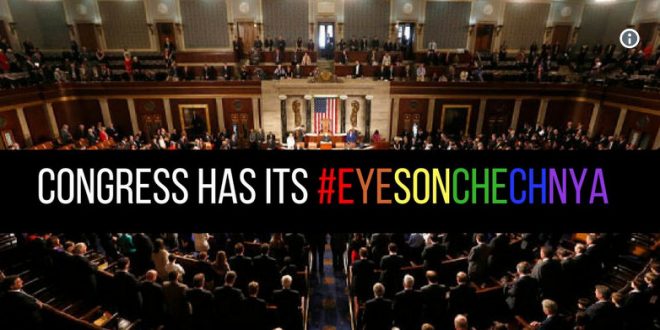 The Congressional LGBT Equality Caucus commended the House of Representatives for passing H.Res.351, a bipartisan resolution condemning the detention, torture, and murders of gay and bisexual men in Chechnya. H.Res.351 was introduced by LGBT Caucus founding member and former House Foreign Affairs Committee Chair Rep. Ileana Ros-Lehtinen (FL-27) on May 23rd and passed in the House Foreign Affairs Committee on May 25th by unanimous voice vote. H.Res.351 has 83 bipartisan cosponsors. H.Res.351 passed by voice vote.

“I’m proud that the House passed this strong resolution condemning the recent violence targeting gay men in Chechnya. Now, it’s critical that we do more to ensure those fleeing horrific violence can relocate somewhere safe,” said LGBT Caucus CoChair Rep. David Cicilline (RI-01). “This is an important step, but there is much more work left to be done.”

“We will continue to stand united with the LGBT community and shine a bright light on these atrocities, which are encouraged by the evil Putin regime in Russia, in order to help ensure that those who are responsible for these crimes are held to account for their despicable actions,” said Rep. Ileana Ros-Lehtinen (FL-27)

“The People’s House has now made its collective and unanimous voice known: the situation in Chechnya cannot stand,” said LGBT Equality Caucus Vice Chair Rep. Alan Lowenthal (CA-47). “We as a nation must lead the world in acting. It is our duty and responsibility to be the beacon on the hill that leads the way. It is now up to President Trump, Secretary of State Tillerson, and our United Nations Ambassador Nikki Haley to follow through on the consensus of the House and bring as much domestic and international political pressure as possible on the Russian government to rein in these deplorable human rights violations.”

Proud to support resolution to condemn persecution of #LGBT individuals in #Chechnya, which overwhelmingly passed the House #EyesOnChechnya

House condemned the violence against gay & bisexual men in Chechnya. Proud to cosponsor this resolution. We have our #eyesonChechnya. pic.twitter.com/Yd2sXoZ2bq

.@RepEdRoyce speaks in support of res condemning violence against gay men and those perceived to be gay in Chechnya https://t.co/R6zYDFXKCC

On @HouseFloor: Spoke on my bill 2 condemn violence against #LGBT individuals who are being persecuted, arrested, sent 2 prison in #Chechnya pic.twitter.com/saLcOS6aDn

Today, Congress took action by passing #HRes351 to show we have #EyesOnChechnya. We cannot stand by while the LGBT community is targeted.

Thrilled to co-sponsor House Resolution 351, which just passed! We have our #EyesOnChechnya and we stand for LGBTQIA rights here and abroad.

Proud to make this statement with my House colleagues that we have our #EyesOnChechnya. The violence must stop. https://t.co/oL0OdPXZyd