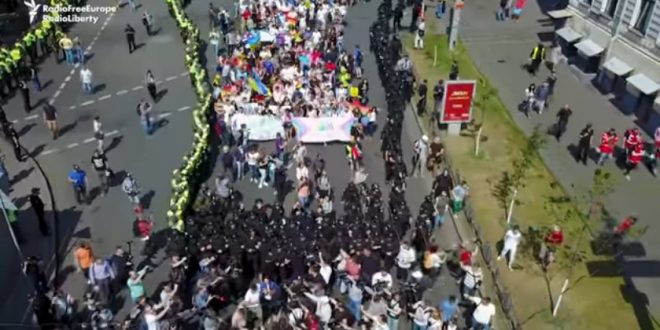 Thousands of people attended a gay pride parade in Ukraine’s capital amid tight security Sunday. A counter-demonstration by a few hundred ultra-nationalists resulted in scuffles with police in which two officers were injured and six people arrested, Kiev police chief Andrei Krishchenko said.

Much of downtown Kiev was cordoned off and about 5,000 police officers were on duty for the gay pride march, which has traditionally been a focal point for attacks by ultra-nationalists. Kiev police spokeswoman Oksana Blishchik wrote on Facebook that about 2,500 people attended. The route of the parade was changed at the last minute in an attempt to head off clashes.

People marched in colorful costumes and with rainbow flags and placards, including one that read “Love and let love.” The ultra-nationalist group Right Sector had warned the day before that their supporters would ensure the parade ended in a “bloodbath.”