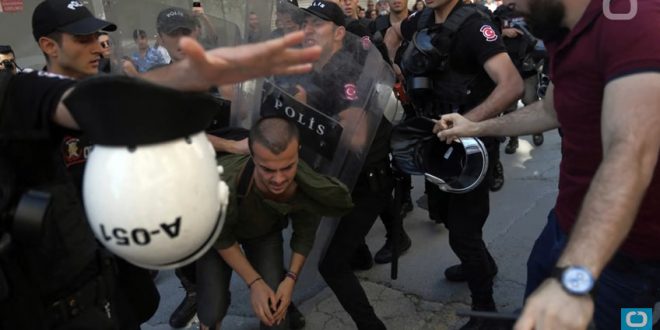 Activists gathered for gay Pride in Istanbul Sunday in defiance of a ban by authorities, and despite riot police who used tear gas to disperse crowds. Dozens turned up to wave rainbow flags and LGBT banners, watched by much larger numbers of Turkish riot officers as well as far-right protesters.

There were more than two dozen arrests, activists told NBC News, including at least one member of the media trying to cover the event. Pictures from the scene showed some of activists being arrested or being kicked by plain-clothes police, as well as tear gas being deployed. Activists said rubber bullets were also fired. The march was banned — for the third year in a row — by the city governor, citing safety and public order fears.

“We are not afraid, we are here, we are not going to change,” organizers said in a statement. “Governors, governments, states change … we stay.” Police with riot shields and helmets enforced the ban by sealing off entrances to the main Istiklal Street, forcing activists to gather in various side streets.

Comments at the YouTube clips below contain many calls for a “gay Holocaust” and for ISIS to attack pride parades.

Previous Ivanka Trump: I Try To Stay Out Of Politics [VIDEO]
Next FRC: Send Us Money To Help Get Obergefell Overturned