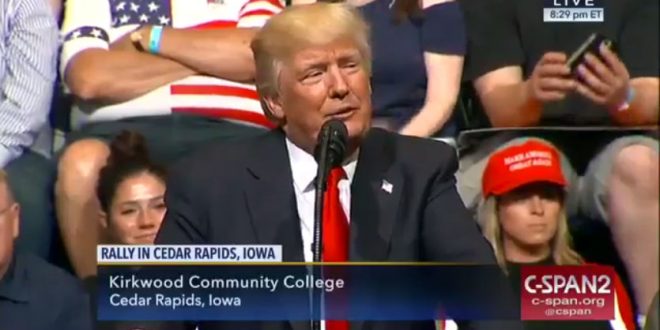 Trump: I Only Want Rich People In Charge [VIDEO]

Contradicting rhetoric from his presidential campaign, President Donald Trump explained why he chose Wall Street billionaires for several of his Cabinet roles during a campaign-style rally in Cedar Rapids, Iowa, Wednesday evening.

“So somebody said, ‘Why did you appoint a rich person to be in charge of the economy?’ I said, ‘Because that’s the kind of thinking we want … because they’re representing the country. They don’t want the money. And they had to give up a lot to take these jobs.”

“We can’t have the world taking advantage of us anymore,” Trump added. “And I love all people, rich or poor, but in those particular positions, I just don’t want a poor person,” Trump added. “Does that make sense? If you insist, I’ll do it — but I like it better this way, right?”

Remarkable clip from tonight where Trump explains why only rich people should be in charge of economic policy.

Marie Antoinette would blush: Trump says "I just don’t want a poor person” in my cabinet-He thinks they would steal: https://t.co/ofHxRzZWrf

Trump's Iowa rally – charlatan gets struggling people to cheer as he proclaims the rich should govern #kleptocracy https://t.co/HkLX8F6lP6