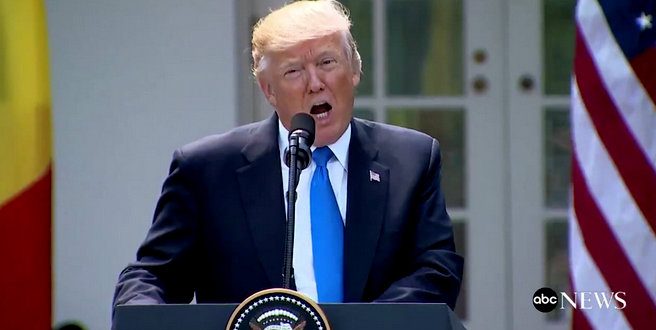 Trump insists that Comey lied in some parts of the testimony he gave Thursday to the Senate intelligence committee. Comey testified under oath.

Trump says that he never asked Comey for a pledge of loyalty and never told Comey he hoped the investigation of former national security adviser Michael Flynn would go away.

“Yesterday showed no collusion, no obstruction,” Mr. Trump said in the White House Rose Garden, during a news conference with the visiting Romanian president.

“That was an excuse by the Democrats, who lost an election they shouldn’t have lost,” he said. “It was just an excuse, but we were very, very happy, and frankly, James Comey confirmed a lot of what I said, and some of the things that he said just weren’t true.”

“I didn’t say that,” Mr. Trump said of the request regarding the former national security adviser, Michael T. Flynn, “And there’d be nothing wrong if I did say it.”

About the loyalty pledge from Mr. Comey, Mr. Trump said: “I hardly know the man, I’m not going to ask him to pledge allegiance.”

Reporter: “Would you be willing to speak under oath to give your version of events?”
Pres. Trump: “100%” https://t.co/Okz2bwUl4f pic.twitter.com/jdAAR8HFOt

Just thinking out loud here, but, um, is there a person on earth who doesn’t think Trump would happily lie under oath?

Trump would obviously lie under oath, but it’s more likely he just lied about being willing to testify under oath

This. This is exhausting

Very significant that Trump agreed to testify over oath. Would be more significant if Trump had a habit of keeping his word.

Let’s also be clear, trump is accusing James Comey of lying under oath whilst at the same time saying Comey vindicated him. Can’t be both. 👊