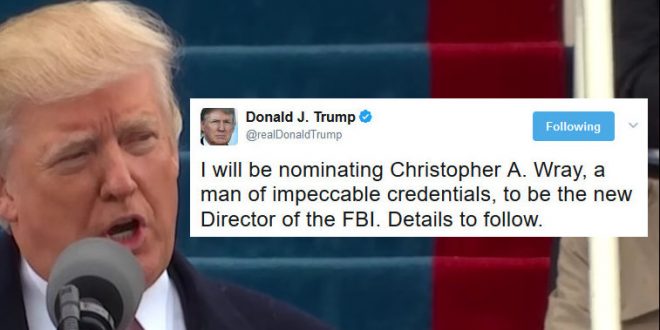 This morning Trump tweeted that he will nominated Christopher A. Wray to be FBI director. Wray represented Chris Christie during the Bridgegate scandal. Here’s his bio at the DOJ’s site:

Early History: Christopher Asher Wray was born in 1967. He graduated from Yale University in 1989 and received his law degree from Yale Law School in 1992. He then clerked for Judge J. Michael Luttig of the U.S. Court of Appeals for the Fourth Circuit. In 1993, Mr. Wray started working in private practice in Atlanta, Georgia. In 1997, he joined the U.S. Attorney’s Office for the Northern District of Georgia. In 2001, he served at Main Justice as an Associate Deputy Attorney General and, later, as Principal Associate Deputy Attorney General.

Tenure: In 2003, Mr. Wray was nominated by President George W. Bush as Assistant Attorney General in charge of the Criminal Division. He served in that position until 2005.

Later Career: After his service at the Department, Mr. Wray returned to private practice, specializing in white collar and internal investigations.

I will be nominating Christopher A. Wray, a man of impeccable credentials, to be the new Director of the FBI. Details to follow.

Previous James Clapper: Watergate “Pales In Comparison” To What The US Is Currently Going Through [VIDEO]
Next Nazi Site Raises $150K To Fight SPLC Lawsuit