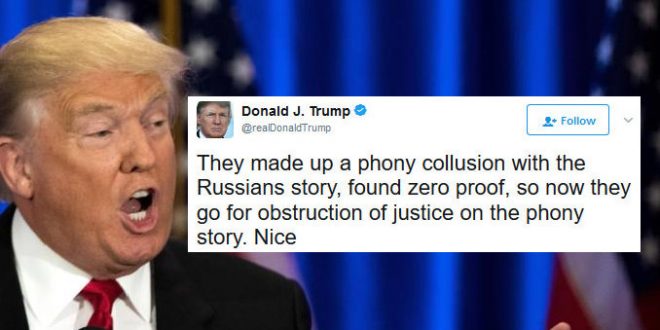 President Trump early Thursday pushed back on a report that the special counsel leading the Russia probe is now looking into whether Trump obstructed justice. The president has in the past decried the investigation into the Russian meddling in the U.S. presidential race and pushed backed against reports of collusion. On Wednesday, The Washington Post reported the special counsel named to investigate the Russian election meddling is looking into whether Trump sought to obstruct justice.

They made up a phony collusion with the Russians story, found zero proof, so now they go for obstruction of justice on the phony story. Nice

Previous Trump Business Partner And Advisor Named As Finalist In Bidding To Construct New $1.7B FBI Headquarters
Next Trump Ally Michael Savage Calls For Government Takeover Of The Media In Wake Of Virginia Shooting