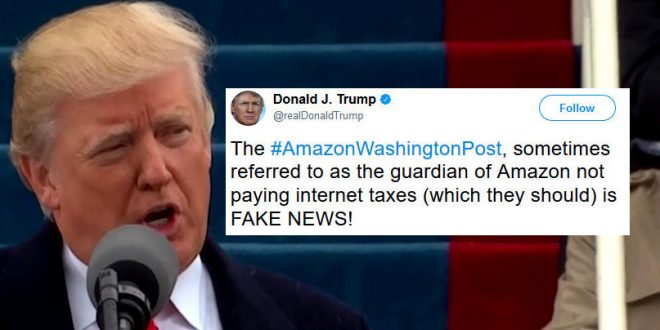 President Trump on Wednesday attacked The Washington Post and its owner, Amazon founder Jeff Bezos, for its coverage of him and his administration. The president is escalating his attacks on the news media as he struggles to advance his agenda in Congress and grapples with the wide-ranging probe into whether his associates colluded with Russia in its efforts to influence the 2016 presidential election.

Trump’s broadside against the Post came after it published an article revealing that fake Time magazine covers with Trump’s photo hung at several of his properties. It also ran a piece headlined “Who’s afraid of Trump? Not enough Republicans — at least for now.” In his Post tweet, Trump appeared to reference Amazon’s past efforts to keep online purchases tax free. But the retailer does collect sales tax on purchases across the U.S.

The #AmazonWashingtonPost, sometimes referred to as the guardian of Amazon not paying internet taxes (which they should) is FAKE NEWS!