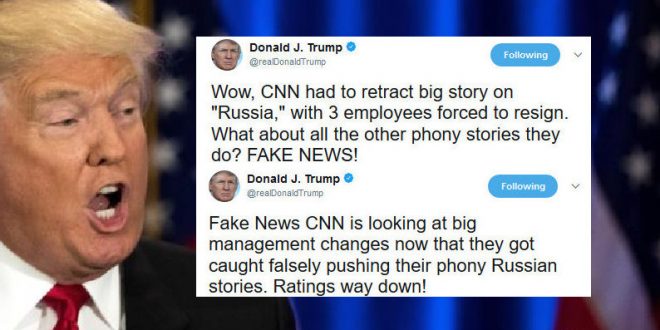 The story in question, published late last week, reported that the Senate Intelligence Committee was investigating the head of a Russian investment fund who met before the inauguration with Anthony Scaramucci, a financier and high-profile member of Trump’s transition team.

CNN also reported that the Senate committee was looking into whether or not Scaramucci had suggested that sanctions against Russia might soon be lifted. In addition to the story’s retraction, three CNN employees, including a Pulitzer Prize-winner, resigned from the company.

CNN announced on Monday afternoon that three network officials are leaving their jobs over the incident: Frank, the reporter on the story; Eric Lichtblau, a recent CNN addition from the New York Times who edited the piece; and Lex Haris, the executive editor of “CNN Investigates.”

The moves follow an investigation carried out by CNN executives over the weekend, with the conclusion that longstanding network procedures for publishing stories weren’t properly followed. “There was a significant breakdown in process,” says a CNN source. “There were editorial checks and balances within the organization that weren’t met.”

Critics will long cite this episode as evidence that CNN is precisely what Trump has called it — “fake news.” Yet the departure of three journalists immediately following a mangled story provides a counterpoint to this particular slander. Purveyors of fake news, after all, don’t take drastic personnel moves following a bogus story. They rejoice in it.

Rather predictably, this morning most of Breitbart’s front page is devoted to the story, with the top item about nutjob James O’Keefe. Previous GERMANY: Merkel Signals Green Light For Marriage
Next Jury Selection Crawls In NYC Trial Of Pharma Douche Because Everybody Hates Him: “He Looks Like A Dick”