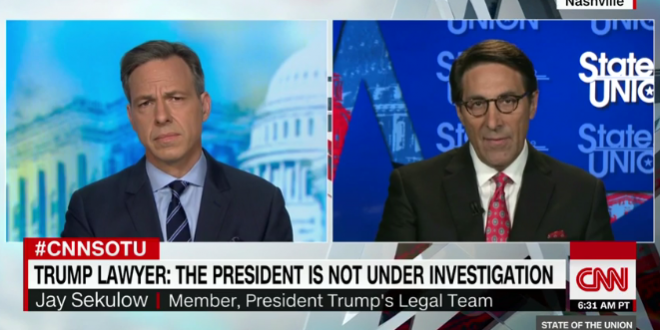 One of President Trump’s attorneys on Sunday insisted “there is not an investigation of the president of the United States, period.” He was responding to reports that a Justice Department investigation has expanded to obstruction of justice charges related to the president’s decision to fire an FBI director, as well as apparent confirmation by the president himself.

“The tweet from the president was in response to the five anonymous sources purportedly leaking info to the Washington Post,” he said. “He’s not afraid of the investigation — there is no investigation,” Sekulow added.

.@JakeTapper to @JaySekulow : “so the President said he was under investigation, even though he isn’t?” #CNNSOTU https://t.co/kEkjrjD88m

Previous Trump Lies About His Approval Ratings
Next Caitlyn Jenner On Virginia Gunman: Luckily The Guy Was A Bad Shot, Liberals Can’t Even Shoot Straight