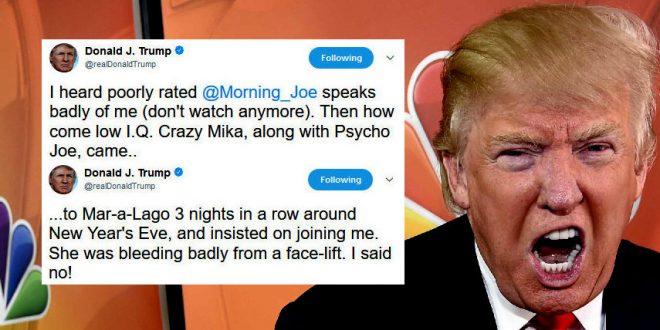 President Trump on Thursday attacked MSNBC’s Joe Scarborough and his Morning Joe co-host and fiancé Mika Brzezinski, saying she was “was bleeding badly from a face-lift” during a visit to Mar-a-Lago last year. The president made the comments during a Twitter rant aimed at the morning show for its recent criticism of his administration—a rant in which he also labeled Brzezinski “low I.Q. Crazy Mika” and gave Scarborough the nickname “Psycho Joe.”

…to Mar-a-Lago 3 nights in a row around New Year's Eve, and insisted on joining me. She was bleeding badly from a face-lift. I said no!

Lincoln: “Four score and seven years ago…"
Reagan: “Mr. Gorbachev, tear down this wall”
Trump: “She was bleeding badly from a face-lift"

It's all way beyond the point of mortifying now. You act terribly unpresidential on a daily basis. What next – badly photoshopped memes?

BTW how is your wife's cyber bullying initiative going?

How about the time you beat your wife because your crappy hair plug surgery went wrong? Care to tell us about that?

New low, Desperate Donald. Gutter level. You disgrace the office of the President in new and profound ways on a daily basis.