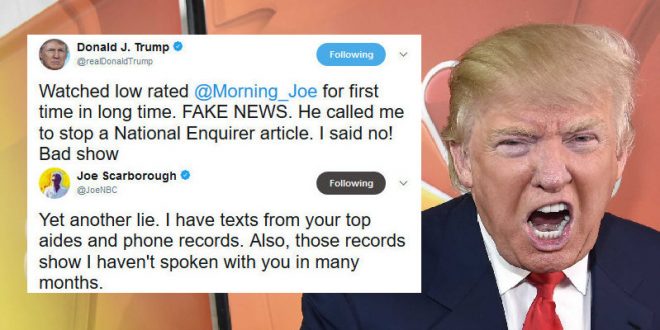 “Morning Joe” host Joe Scarborough said President Trump was making “yet another lie” on Friday with comments about the National Enquirer. Just as the MSNBC show was to go off the air on Friday, Trump tweeted that Scarborough had called to get him to stop a negative story that was to be published in the Enquirer.

The back and forth continued a feud that intensified Thursday after Trump attacked Scarborough’s co-host and fiancee Mike Brzezinski with a tweet that insulted her intelligence and described her as showing up at Trump’s Mar-a-Lago estate bleeding from a face-lift.

Watched low rated @Morning_Joe for first time in long time. FAKE NEWS. He called me to stop a National Enquirer article. I said no! Bad show

Yet another lie. I have texts from your top aides and phone records. Also, those records show I haven't spoken with you in many months. https://t.co/TZWiElo6Gs

Why do you keep lying about things that are so easily disproven? What is wrong with you? https://t.co/aAoUj5HYZS