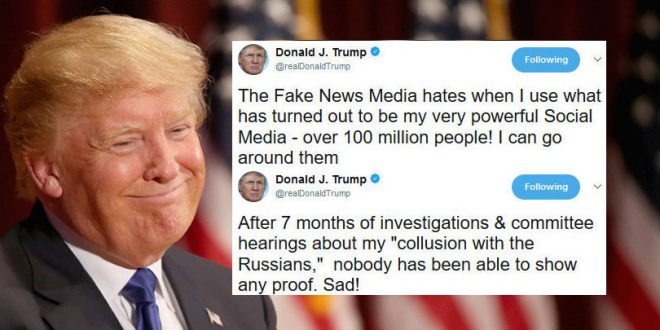 President Trump assailed the ongoing probes of Russia’s role in the 2016 election on Friday, blasting Congress and the Justice Department for continuing the investigations despite not presenting “any proof” of collusion between his campaign and the Kremlin.

Reports emerged this week that the government’s probe of last year’s election has expanded to included possible obstruction of justice in the wake of Trump’s abrupt firing of FBI Director James Comey, who was overseeing the agency’s investigation.

The Fake News Media hates when I use what has turned out to be my very powerful Social Media – over 100 million people! I can go around them

After 7 months of investigations & committee hearings about my "collusion with the Russians," nobody has been able to show any proof. Sad!