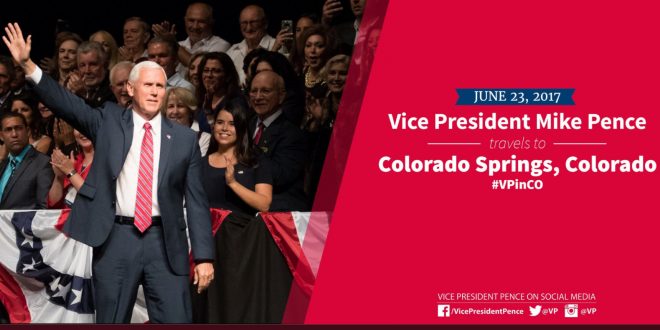 Vice President Mike Pence is headed to the Rocky Mountains Friday to speak at an anniversary celebration for Focus on the Family, a Christian nonprofit in Colorado Springs, Colo. Pence, a Christian, is scheduled to address attendees at the organization’s 40th-anniversary event, according to the White House. The vice president will also visit Schriever Air Force Base in Colorado Springs to be briefed on the facility and have lunch with servicemembers before giving a brief speech.

“This is an extreme organization that promotes the dangerous and abusive practice of ‘conversion therapy,’ lobbies against allowing LGBTQ people to adopt children who need homes, and opposes anti-bullying efforts in schools. These views are not just antiquated — they are dangerous and wrong. And for the Vice President of the United States to lend credibility to them is beyond shocking.”

Focus on the Family threatened that marriage equality will bring the destruction of civilization, and it has referred to the children of same-sex couples as “human guinea pigs.” They continue to promote the junk science behind conversion therapy, advocate for discriminatory policies and engage in other actions that cause real harm to LGBTQ people and families. Mike Pence has repeatedly praised the organization’s founder, James Dobson, and even called him his mentor at a gathering of anti-LGBTQ activists in June.