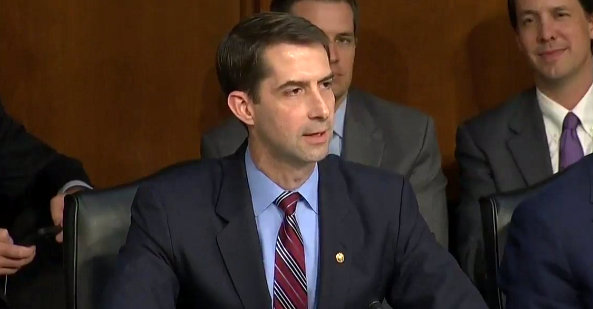 Attorney General Jeff Sessions’s testimony has been marked by some heated moments, including tense debates over whether he is “stonewalling” the committee.

And then came Sen. Tom Cotton, Republican of Arkansas. The first-term senator opened by suggesting Democrats on the committee were going down “rabbit trails,” invoked the novels of John le Carré and the James Bond films and generally cast questions about potential collusion between the Trump campaign as Russia as the work of outlandish spy fiction.

His line of questioning was so friendly that a smiling Sessions twice thanked him for his inquiries. When Cotton said it was ridiculous to suggest that a potential interaction between Sessions and the Russian ambassador at a Washington hotel last year could have involved potential collusion, Sessions had only praise for the senator.

“Thank you for saying that, Senator Cotton,” Sessions said. “It’s just like through the looking glass. I mean, what is this?”

Sen. Cotton: Do you like spy fiction?
Sessions: Yes
Cotton: Ever heard a plotline so ridiculous as [this]?
😂 pic.twitter.com/4bwLsOMBWt

Sen. Cotton’s next question to Sessions will be “Do you like movies about gladiators?”

Previous AG Jeff Sessions: Any Suggestion That I Colluded With Russia Is An “Appalling And Detestable Lie” [VIDEO]
Next Sen. Ron Wyden Battles Sessions Over “Stonewalling” When Sessions Refuses To Answer Questions [VIDEO]