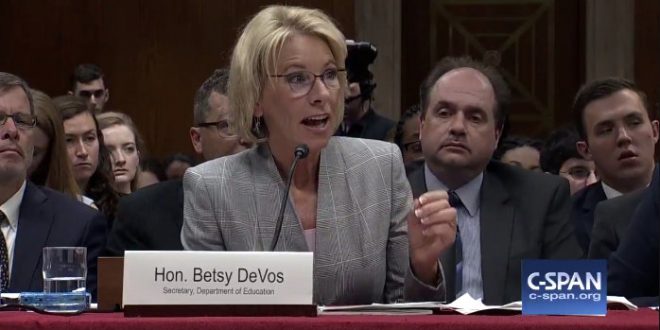 Sen. Jeff Merkley (D-Ore.) slammed Secretary of Education Betsy DeVos Tuesday when she “refused to affirm” that her department would protect students from discrimination in her testimony before the Senate. “I think that’s very important for the public to know that today, the secretary of education, before this committee, refused to affirm that she would put forward a program that would ban discrimination based on LGBTQ status of students or would ban discrimination based on religion,” Merkley said.

The testy exchange occurred during a Senate hearing on President Donald Trump’s proposed 2018 budget, which calls for massive cuts to education. DeVos had said that “federal law must be followed” by schools receiving federal funds. Merkley countered that federal law is often unclear on issues of discrimination, and pressed her to say whether her Department of Education would protect students in all cases.

DeVos went on to say that under her rule, the Department of Education “is not going to issue any decrees” to protect LGBT students.