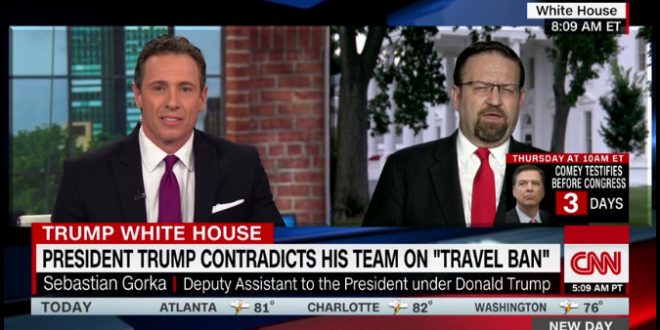 In a heated interview, Sebastian Gorka blasted CNN as “fake news” when “New Day” host Chris Cuomo hammered the deputy assistant to President Donald Trump. Cuomo began by asking how Trump managed to unravel months of the White House ‘spinning’ that Trump’s ban on immigrants coming into the United States is not a “Muslim ban” or a “travel ban.”

“The president can call it whatever he likes because he has the Constitutional authority to determine who comes into the United States,” Gorka claimed. Cuomo was quick to follow up by asking why, if that was the case, the White House felt the need to spend all of those months spinning that it wasn’t a ban. Gorka followed up that CNN is the greatest “purveyor of fake news.”

The conversation ultimately devolved into Gorka trying to distract by attacking CNN saying that the network is failing. Cuomo blasted back that CNN’s numbers are up over 100 percent over the last year, which Gorka attempted to claim was wrong.

Saddened that @CNN & @ChrisCuomo spend 10+ mins on @POTUS tweet instead of the 7 dead and 48 injured in London.