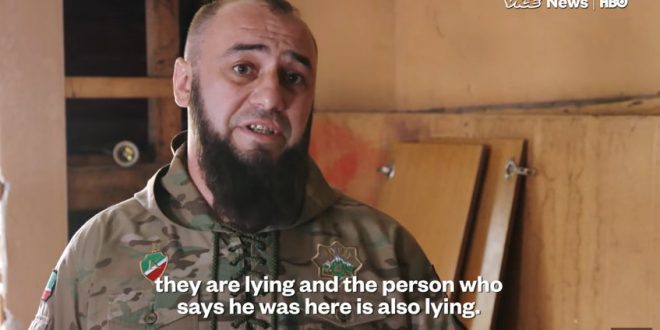 RUSSIA: Vice News Reports From Inside The Chechen Prison Where Gays Were Tortured And Killed [VIDEO]

Via press release from HBO:

VICE News has obtained exclusive access to Argun Prison in Chechnya where it is alleged that gay men were rounded up and tortured as part of an unprecedented ‘anti-gay purge’ by Chechnya’s law enforcement. VICE News is the first international news organization to be allowed into the location, capturing images and footage from the now abandoned police facility in Argun.

In a rare on-camera interview with VICE News correspondent, Hind Hassan, Kataev dismissed repeated questions regarding his involvement in the torture of gay men, stating: “Imagine if there are gays… would we, the Chechens, communicate with them at all? My officers would not even want to touch such people – if they exist – let alone beating or torturing them.”

Russian bots and Trumpanzees are flooding into the comments at YouTube. Avoidance advised.